Animals You Would Find in Southeast Mexico

Mexico is one of the eleven countries around the globe that possesses a megadiversity because it exhibits a high amount of biodiversity of endemic species from flora and fauna so far identified). It holds fourth place for birds with over 1080 species.

The Yucatan Peninsula, especially, offers visitors different ecosystems. But beyond the beautiful flowers and stunning trees, the highlights are the birds and animals that are endemic from the states of Quintana Roo, Yucatan, and Campeche, particularly in cities like Campeche, Merida, Valladolid, Cancun, Playa Del Carmen, Tulum, and the rest of the Costa Maya.

Among the endemic animals you will find here, the most amazing ones are:

This bird is unmistakable among aquatic birds due to its plumage, extremely long neck and legs, and curved bill.

The only flamingo population existing in Mexico is in the north of the Yucatan Peninsula, along the coast of the State of Yucatan. The best places to see flamingos are Celestun Biosphere Reserve and Rio Lagartos Biosphere Reserve, where people can visit the area on different tours and expeditions.

The best time to observe large populations of flamingos in Celestun is from December to April. And in Rio Lagartos, the best season runs from March through June when they lay eggs and take care of chicks. Also, occasionally flamingos can be seen in the Sian Ka’an Biosphere Reserve, near Tulum.

This bird can be found in some parts of Mexico, from Veracruz to the Yucatan Peninsula.

It has distinctive turquoise plumage on the throat, surrounded by black from the chin to the chest, with a turquoise green eyebrow. The underparts are dull cinnamon, and the tail feathers semi-naked in the shape of a racquet. These feathers at the end of its tail swing back and forth like the pendulum of a clock.

It is insectivorous, especially beetles, butterflies, and bees.  Also, it nests in caves or sand quarry walls, or hollows inside wells or cenotes.

A coati is one of the most charming mammals in the Peninsula of Yucatan. Its color is grayish-brown or yellowish. It has the size of a domestic cat, but it weighs between three and thirteen pounds.  It has a very long, faintly ringed tail, which frequently carries erect.

Coati has a pointed snout, and its nose is well adapted to root conscientiously even in small holes in the grounds. The coati is omnivorous. It feeds on fruits, seeds, small mammals, amphibians, reptiles, birds, eggs, insects, and other invertebrates.

Its eyes are sounded by a thin, dark brown ring and another white one. It has five toes in each extremity. Although its forepaws are smaller than the hind ones, it allows it to walk and gallop.

The coati makes nests and sleeps in the trees at night and then forage on the ground during the day.

The type of crocodile that lives in the Yucatan Peninsula is a small to medium-sized crocodile called Crocodylus moreletii. It usually grows to about 3 meters (10 feet) in length.

It has a broad snout with 66 to 68 teeth when they are fully mature. Like other crocodiles, crocodiles in Campeche, Yucatan, and Quintana Roo have pointed and cone-shaped teeth outside of the jaws.

The endemic crocodile has dark grayish brown with dark bands and spots on the body and the tail. Also, it has four short legs, giving it a sprawling gait and a long tail for swimming.

This type of crocodile can be along the coast in the brackish waters of lagoons and Manglar, saltwater mangroves. It feeds on mammals, birds, and reptiles.

Spider monkeys are in tropical forests of Central and South America. This type of monkey is very light, weighing between ten to eighteen pounds and measuring between one to two feet from head to toe.

The spider monkey has a very slender body. Its arms and legs are long and thin. Also, it has a long and prehensile tail and a small head. For that reason, it has a great ability to move nimbly among the tropical forest.

Its fur is densely distributed all over its body and is a dark grayish brown color along its back, while its belly is creamy. It has only four fingers in each hand.

A spider monkey can eat fruits, leaves, flowers, and insects. If you would like to see this type of monkey or some others a nice place to visit them is at the Akumal Monkey Sanctuary & Rescued Animals which is 2 hours away from Cancun. Here, visitors can find a variety of primates and some other rescued animals. 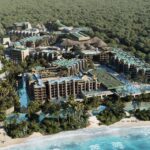 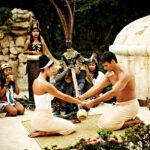